Despite the comparatively larger public investment in higher education across most states and the federal government, American students are saddled with higher tuition costs than ever. Where is all that money going if not to reduce the costs of attending universities? To hire more qualified educators at least?

The New York Times highlights one major and often understated factor in this odd equation:

Interestingly, increased spending has not been going into the pockets of the typical professor. Salaries of full-time faculty members are, on average, barely higher than they were in 1970. Moreover, while 45 years ago 78 percent of college and university professors were full time, today half of postsecondary faculty members are lower-paid part-time employees, meaning that the average salaries of the people who do the teaching in American higher education are actually quite a bit lower than they were in 1970.

By contrast, a major factor driving increasing costs is the constant expansion of university administration. According to the Department of Education data, administrative positions at colleges and universities grew by 60 percent between 1993 and 2009, which Bloomberg reported was 10 times the rate of growth of tenured faculty positions.

By my understanding, this trend also contributes to high healthcare costs, as hospitals and other healthcare facilities increasingly employ, or are administered by, highly paid individuals with little to no medical background.

What are your thoughts and reactions?

Hat tip to my friend James for sharing this article. 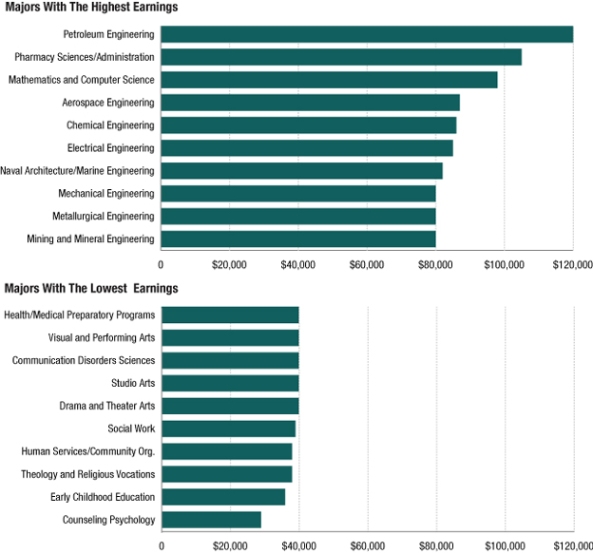 A graph of the most and least lucrative majors, according to a study by economist Anthony Carnevale of Georgetown University, as reported in NPR. I have a few comments.

First, I wish we would look more at the social value of a job rather than focusing more (if not solely) on its market value. While it’s certainly important to know how much money certain careers and majors may provide, I think this underestimates just how valuable many of these low-paying jobs are to society. Those aiming for such admirable and vital goals as social work, psychology, and early childhood education shouldn’t be made to feel like losers pursuing dead-end work. Yes, they should be made aware of the caveats, but there needs to be a more holistic picture of the pros and cons.

Second, education isn’t always about trying to make money — or at least it shouldn’t be. Some people have career paths that are separate from their academic ones, and go to school because they learn more effective through lessons and lectures. The major one chooses needn’t always be based on income potential — if it were, many people would subsequently end up neglecting a lot of vital knowledge in favor of following the money trail.

Third, if there’s one thing that’s a bigger waste of time and money than going for a “useless” major, it’s going for a potentially well-paying major that you aren’t cut out for or won’t like.  If we focus too much on picking majors based solely money, you’re going to get a lot of people wasting money on courses they’re not genuinely interest in or cut out for. Similarly, I find it unseemly for people to be driven to a particular profession solely for the money; what would that suggest about their values or incentives?

Now for most people,  the ideal approach is is to strike a balance between what is practical, feasible, and still enjoyable — not an easy task, but a necessary one.  Of course, I accept the need for one to find a balance between what pays well and what you want to do. Money is certainly important, but so is the quality of life that comes with doing something you actually enjoy. Focusing on just one or the other won’t suffice, even if having more money but a mediocre job is arguably a slightly better arrangement.

Finally, I think all this raises serious issues about our nation’s value system. As I noted in my first point, too many crucial services pay too little, leaving many of the most talented people to concentrate on more lucrative ventures; some of these, ike engineering, are certainly valuable, but many are arguably less so from a social perspective: finance, for example, has largely become separate from its original purpose and serves largely to make a lot of money to a comparatively small number of people.

What does it say about our society when hedge fund managers and traders make far more money than those teaching our next generation, leading their communities, and helping the most underprivileged in our society?

To be clear, I am not saying that people should necessarily have to base their college degrees on low-paying fields, just that we should analyze their social value separate from their market ones, and be wary of pursuing something strictly for the money without analyzing feasibility, cost of education, social contribution, and so on. Even well-paying jobs can be limited or come with caveats that are underappreciated due to the focus on just their monetary rewards.

What are your thoughts?

We need more innovative approaches like this within our education system. Punishing people, especially impressionable children, without any consideration of the root causes not accomplishes nothing, but it makes the problem much worse.

THE FIRST TIME THAT principal Jim Sporleder tried the New Approach to Student Discipline at Lincoln High School in Walla Walla, WA, he was blown away. Because it worked.

In fact, it worked so well that he never went back to the Old Approach to Student Discipline.

This is how it went down: A student blows up at a teacher, drops the F-bomb. The usual approach at Lincoln – and, safe to say, at most high schools in this country – is automatic suspension.

Instead, Sporleder sits the kid down and says quietly: “Wow. Are you OK? This doesn’t sound like you. What’s going on?” He gets even more specific: “You really looked stressed. On a scale of 1-10, where are you with your anger?”

The kid was ready. Ready, man! For an anger blast to his face….”How could you do that?” “What’s wrong with you?”…and for the big boot…

Though I’m not a socialist, I do enjoy reading their literature once in a while (as well as that of right-wing publications). I care little about the underlying ideology of a particular article, so long as the points being made are accurate and cited. Unfortunately, this Socialist Worker article on the plight of students and the youth seems very precise:

The high youth unemployment numbers isn’t bad news for everyone. Employers are taking advantage of the fact that young workers must compete for scarce jobs, and they’re keeping wages low.

For many young workers, fear of never finding another job means staying in jobs they would otherwise quit because they have no other option. According to a poll of 18- to 34-year-olds by the Pew Research Center, 49 percent say they have taken a job they didn’t want just to pay the bills, and 24 percent reported that they’d taken an unpaid job in order to get some work experience.

The same poll illustrated the ways that many workers struggled to make ends meet by putting off things like starting a family. Some 35 percent said that, as a result of the poor economy, they’d returned to school; 31 percent have postponed either getting married or having a baby.

Indeed, only about half of recent graduate are finding work within the year of their graduation, versus close to 75% just three years ago. None of this makes for a sustainable future.